The development comes less than 24 hours after reports of attacks on foreign nationals, including Nigerians, in South Africa, went viral.

Some protesters also marched inside Ikeja City Mall, which houses Shoprite, MTN and DStv offices. While the protest in Ikeja was peaceful, those of Lekki and Surulere were not.

In Lekki, some of the aggrieved youth lit bonfires and attempted to break into the store but they were prevented by policemen on ground.

Business over for the day at Shoprite, Ikeja

In Ikeja, Shoprite suspended its operations around 4pm, five hours ahead of its normal time for closing.

But some women inside the mall scattered wares on the floor.

While some of the workers attempted to stop them, others stood by amid fear that the attack could escalate.

There were reports on social media that family members of some of those involved in the protests were affected in the attack in South Africa but TheCable could not independently verify this.

Nigerians disrupting the operations of Shoprite at their Lekki Match. 4 police trucks had to be deployed there to stop the revolt. They also had to close the mall.

Those involved in the act reportedly lost their family members to xenophobic attacks in South Africa. 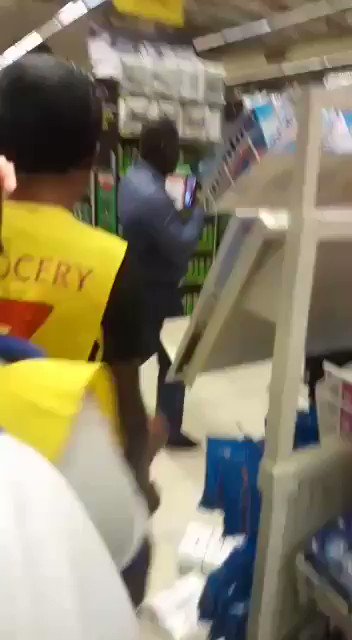 317 people are talking about this

In Surulere, a lady was seen staging a lone protest inside the business outlet, calling on its owners to openly condemn the killings.

In a video she uploaded on Twitter via @MegRicketts, the lady was overheard saying: “What did they do? Is it a crime to migrate? Call your people (and) tell them that you condemn these killings against Nigerians.

“Let us know that you took a stand against them. Stop pretending as if you are not seeing it.”

#shoprite My one man peaceful protest at their Surulere store this morning, against #Xenophobia 4,825 people are talking about this

The latest attack on Nigerians has sparked a nationwide outrage. Geoffrey Onyeama, minister of foreign affairs, had accused the South African police of complicity.

TheCable had reported how President Muhammadu Buhari, whom a source said is considering cancelling his trip to South Africa next month, sent a special envoy to the county regarding the fresh attacks.

President Cyril Ramaphosa of South Africa had invited his Nigerian counterpart to his country for talks on strengthening the relationship between both countries.

South Africa has big business concerns in Nigeria — such as MTN, Shoprite and DStv — while Nigerians are a major force in the retail trade sector of the South African economy.

Join our Whatsapp group and get instant updates.

Steps To Subscribe To the Court of Appeal Reports Nigeria

Alexander Payne: Get these Law books to aid your practice.